Catherine the Great wanted to build a new urban landscape.

In fact, Empress Catherine II, who ruled 1762-1796, wanted to build a new Russia. An enlightened Russia. An empire without rival. An empire with expansive borders and thriving towns. She knew what she wanted to create and she knew (though perhaps not well enough) that the land she governed bore little resemblance to the vision in her mind.

Catherine's primary medium was the written word. (Yes, okay, she also communicated by doling out obscene quantities of rubles, commanding large armies, and, occasionally, banishing upstarts to Siberia). She rather famously articulated her vision of Russian towns - what they would look like, and what life in them would be like - in a series of decrees.

But it isn't easy, even for an empress as formidable as she was, to build cities out of words. Catherine needed plans.

And so, beginning in 1766, officials - sometimes provincial surveyors and governors, sometimes agents of the Commission on the Building of St. Petersburg and Moscow - produced plans for 385 different towns. The plans were meant to show the empress what existed, and to suggest what might exist at some point in the future.

Catherine approved 277 during her reign; Alexander I and Nicholas I approved the rest. By the time they were recopied and prepared for printing, they looked something like this: 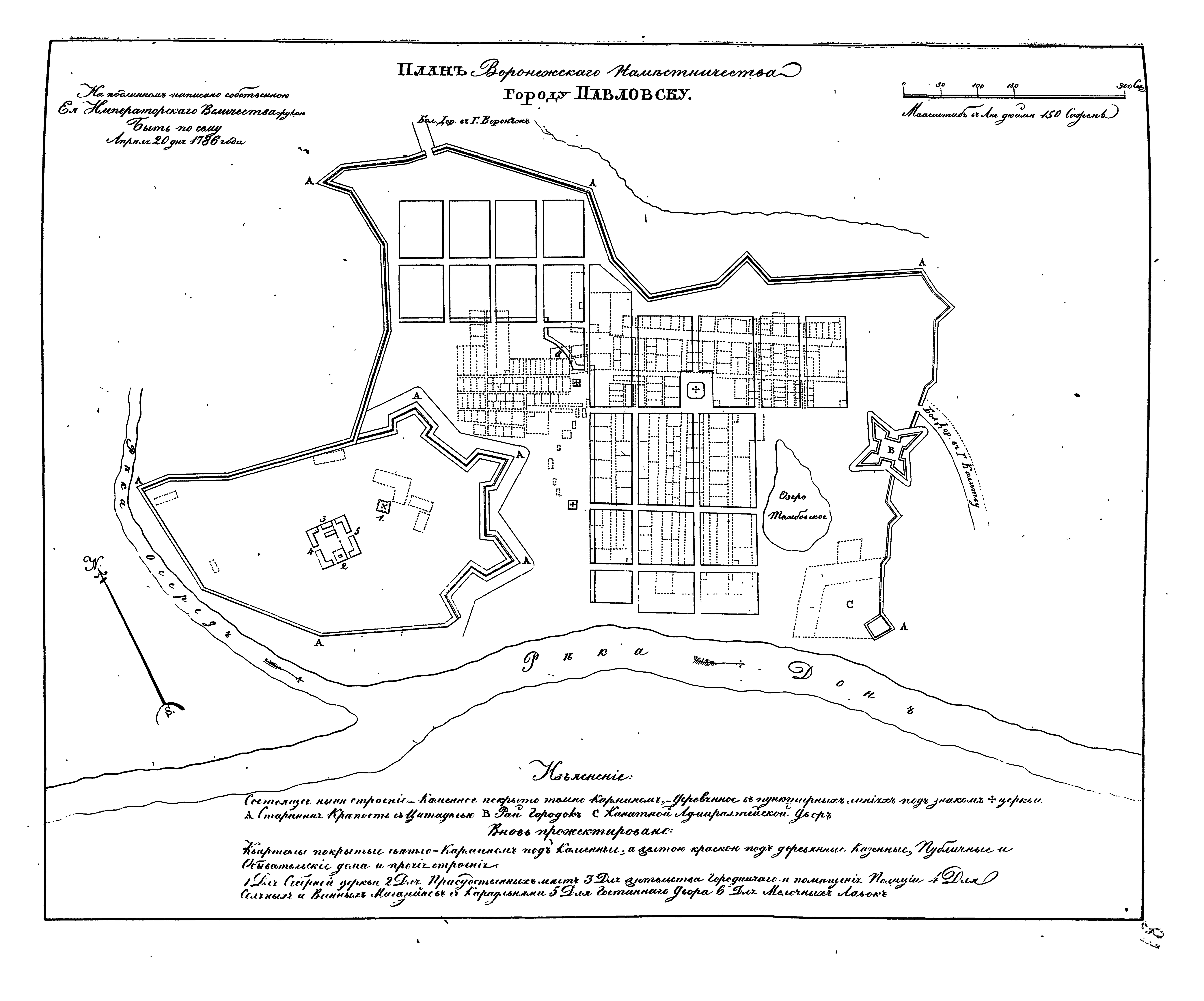 Above: The plan for Pavlovsk (Voronezh Province), 1786

In the reign of Catherine's grandson, Nicholas I, the plans were collected and published in a supplementary volume of the Complete Collection of Russian Laws (known to rabid fans as the PSZ, or Polnoe Sobranie Zakonov). The 1839 volume includes 416 plans (30 towns were mapped more than once). They have been digitized and made available by the Russian National Library in St. Petersburg, as well as by the Russian State Library in Moscow, and copies can be found in major libraries across North America.

In a way, the plans are snapshots.

They show the layout of urban space. They locate churches, magistrates, and markets, as well as geographic features such as rivers or mountains - all features that existed on the ground. Sites that were named and built and familiar to those who lived there. In that sense, the plans give us a sense of "what was."

More than anything though, the plans are, well, plans. They describe an urban landscape composed of gridded town blocks, straight streets, evenly distributed squares, and neat rectangular buildings. They are sketches of what the empress wanted to see. They are plans for how to rebuild should an existing town fall to fire. They are plans for how sites that had once been villages might reinvent themselves.

It takes a while for our eyes to adjust to seeing present and future at the same time. On a single sheet. In the same visual plane. But once they do, we begin to understand how tsars and governors sought to mold the urban fabric under their command into rational, modern forms.

This is our attempt to convert 416 plans - 416 thumbnail sketches of towns as they existed two centuries ago - into usable historical knowledge.

This might sound overly ambitious. After all, the plans have their limits. They do not describe every town in the empire. Some of the towns they describe no longer exist. They barely scratch the surface of how any one town looked - let alone what life there might have been like. They are clearly more concerned with an idealized future steeped in notions of rationality and productivity than with capturing the messy nuances of reality. Those gridded blocks and neat lines? They are nothing more than a glorious act of imagination.

But if you want to know where the breweries or butcheries were (or were supposed to be), this is a good place to start. If you want to know whether small and large towns had (or were intended to have) similar layouts, or what rivers might have had to do with Russian's urban fabric, the plans have a lot to tell us.

If you know your way around the tsarist empire, head over to the Province Galleries. They organize the plans according to... you guessed it... province, with the administrative capital listed first and the rest of the towns in alphabetical order.

If staring at old plans isn't your thing, explore the Vantage Points. This is a set of interactive graphs and maps that allow you to "see" through the plans.

What if you like staring at old plans, but don't read Russian? Pick up a Walking Map. We have translated each and every feature on this short list of fascinating plans. Some are quirky and utterly unique. Others bear characteristics common among dozens of other towns.

Would you prefer to walk straight into the bathhouse, dive into a lake, or prowl fortress walls? Browse the Guided Tours collections.

Remember, it is up to us - students of history, one and all - to study the landscapes painted by these plans, make observations and ask ourselves, again and again, "Could what the plans suggest possibly be true?"